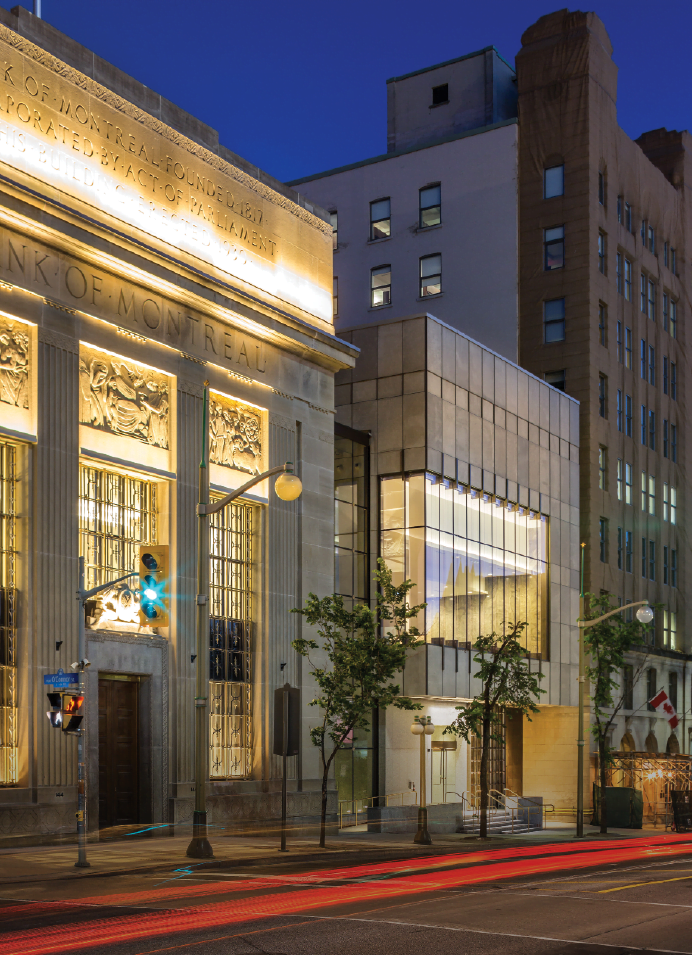 Jury comments:
Perhaps the most impressive aspect of this project is how the envelope and building systems upgrades have been so discreetly integrated into the heritage structure. Architecturally, the atrium ties together the old structure with the new addition, while incorporating daylighting and ventilation strategies. A very sensitive, subtle and sustainable retrofit.

This former Bank of Montreal [a 1932 RAIC gold medal winning and federally classified heritage building] has been rehabilitated and expanded to accommodate a state of the art conference facility for the House of Commons. It serves as a venue for official government celebrations, state dinners, meetings, as well as educational and ceremonial functions. The design approach restored the somewhat dilapidated former bank to its original glory and filled in the adjacent empty lot with a contemporary insertion that contains additional required meeting, service and security programme components.

The technical demands of the new use, including security, IT and AV upgrades as well as completely new mechanical and electrical systems had to be balanced with preservation and restoration of the heritage fabric. The decision to reuse the empty building as a new facility was in keeping with the Government of Canada’s strategy to repurpose existing building stock rather than discarding and building new. The challenge was to rehabilitate the building in a manner that would ensure another 80 years in its new function while at the same time respecting its importance as an icon of Canadian Architecture. While the existing material pallet of the heritage bank had stood up well over the intervening years and became a basis for the future expansion, the mechanical system was not adequate to contemporary standards and significant improvements were pursued including connecting to the Cliff Street district energy plant and using the natural stratification of the tall public spaces for efficiency and comfort.

Heating and cooling needs are moderated by the thermal mass of the existing building and the new stone addition. These energy needs are further reduced by the installation of a new mechanical system featuring radiant cooling, coupled with displacement ventilation for the heritage bank. Given the 10-fold increase in the potential visitor population of the bank hall a significant increase in fresh air and cooling was anticipated and it was a challenge to achieve without negatively impacting the heritage context. The radiant cooling strategy offsets the impact potential of television lighting and assembly occupancy. The existing window radiator enclosures are reused as air supply locations and supplemented by diffusers concealed in benches located around the perimeter. These benches also conceal the valve controls for the new hydronic tubes incorporated in the floor assembly.

Made with ❤ with Elementor​